In this blog post we will walk through the solutions of the levels 0 to 9 of the Nebula wargame, which is hosted on http://exploit-exercises.com. This writeup will force me to memorize commands better and exercise a bit. I fear that this writeup is of no use for other people, since you hopefully want to solve those exercises on your own :)

As the descriptions states you need to find a setuid binary that gets a shell for the flag00 user. We can find setuid executables with a command such as the following:

This command suppresses error messages (The 2>/dev/null part redirects error output to /dev/null). Furthermore the -perm -4000 flag is responsible for

Now execute the found binary and run getflag and you should be done.

This level is also really easy. We need to trick the following code to run the program getflag with id flag01:

As we all now /usr/bin/env executes a program with the current environment. And the environment includes the $PATH variable that specifies where programs can be found, such that users don't need to execute the whole path.

Of course we can set the PATH variable to some folder and include a program there which is called echo.

Level 2 is very easy. The vulnerability is a basic command injection flag. When you see the following lines in the code:

it becomes clear how to call getflag on the target account:

I just ended the current command with ; and appended our own command and closed it again with the original echo statement.

In Level 3 we can write in the home directory and create our own executable scripts. These are executed with a cronjob script that looks like this:

We need to consider the ulimit -t5 call that sets a user limit:

The bash -x will I simply created a small script in writeable.d and added a file test.sh with the following contents:

This level requires us to read a file token in the /home/flag04 directory which we cannot access. But there is a setuid binary that runs with euid flag04 with the following code:

To bypass it, we simple create a symbolic link to the token file. The read() function apparently resolves symbolic links:

When you change to the directory of flag05 you can immediately see a suspicious directory named .backup. There you'll find a tar.gz file. When you decompress and untar it, you'll see that it contains the credentials for a ssh connection. After some tries, you'll see that you may login to the flag05 account with the private key (contained in .ssh/id_rsa).

This one is fairly easy. As the level description states:

The flag06 account credentials came from a legacy unix system.

This just means that the hashed passwords are still stored in /etc/passwd and that they are hashed with crypt(3).

So I installed a password cracking program named john and downloaded the /etc/passwd file from nebula to my host machine.

This one is quite easy. You can immediately see that there is a cgi perl script in the flag07 directory that exposes ping.

Then you can access the cgi bin over a browser and simply inject some command into the script. You need to inspect thttpd.conf config file for the httpd to see on which port the web server is listeingn (7007). Then I did the following:

and then you can see that getflag was executed when you open it with level07:

This level was quite tricky and a lot of fun to solve. You can find a file named capture.pcap in the flag08 directory. Download it to your host (with scp for instance) and open the pcap file with wireshark: 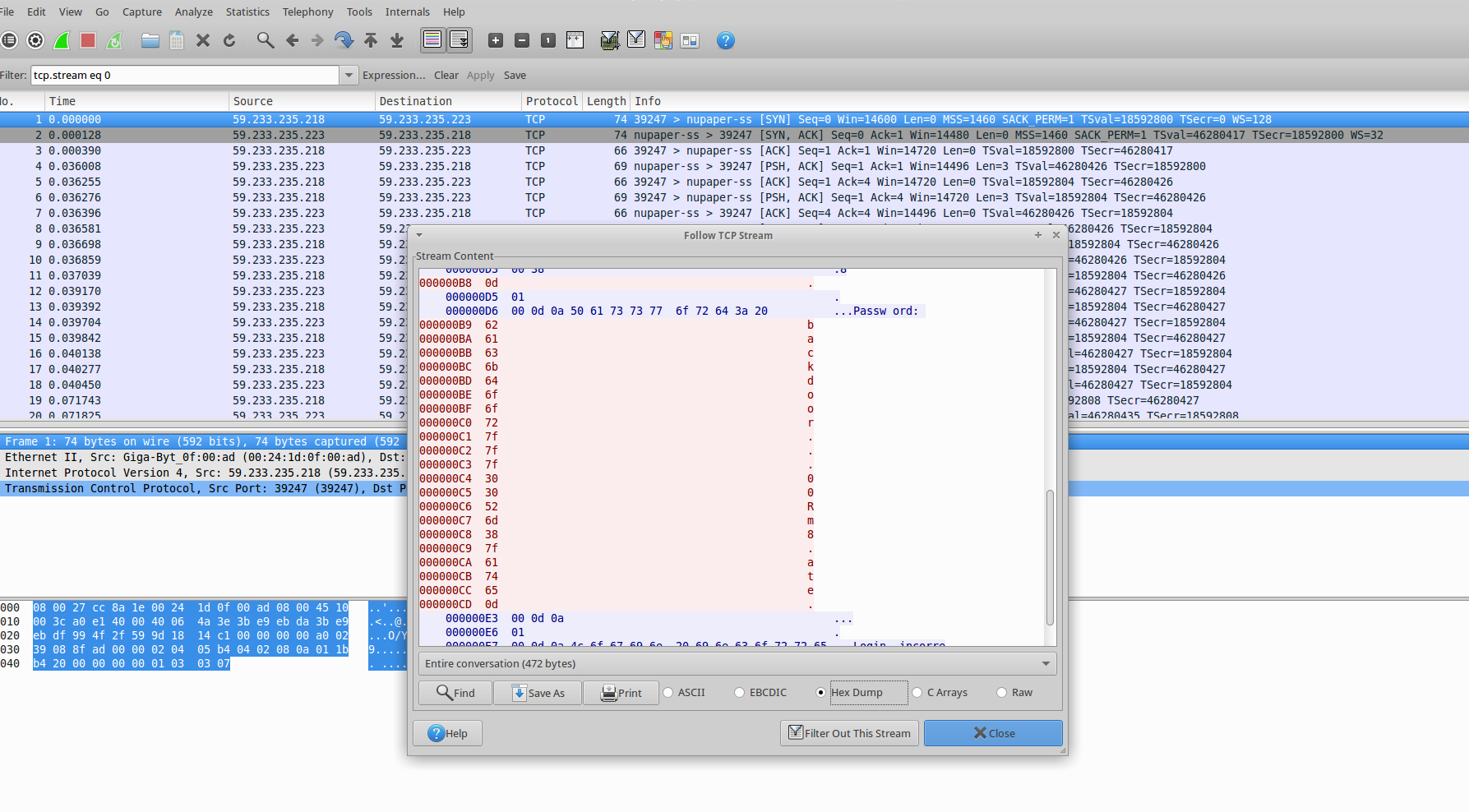 We can see that we captured the network streams of someone trying to loging in with username level08 and a password with some special chars in it: 0x7f. A quick lookup in a ascii table confirms that the ascii code at 0x7f is a control code for the DEL(delete) character. So the overall password is: backd00Rmate

Then you can login to flag08 with this password and execute getflag.

We have a PHP script that is probably executed by the flag09 binary in /home/flag09.

The script contains the following code:

This was also a very nice level. And the code has even a variable named $use_me that helps in exploiting the bug.

To exploit it, I created a file named /tmp/testfile with the below contents. Then I proceeded to call the setuid binary:

How it works: First for the basic understanding read http://php.net/manual/en/reference.pcre.pattern.modifiers.php.

After having read it, we know that every matched group in the pattern in preg_replace() is called with the spam function. But we control what parameter is passed to spam() with the reference \2.

So we can just call a bash command through php with a function like system(). There we make use of the second parameter $use_me.