Github repo that contains the presented code in this post.

In this article I will present you a very simple and in no sense optimized algorithm written in Python 3 that plots quadratic and cubic Bézier curves. I'll implement several variants of Bézier rasterization algorithms. Let's call the first version the direct approach, since it computes the corresponding x and y coordinates directly by evaluation of the equation that describes such Bézier curvatures.

The other possibility is De Casteljau's algorithm, a recursive implementation. The general principle is illustrated here. But the summarize the idea very briefly: In order to compute the points of the Bézier curve, you subdivide the lines of the outer hull that are given from the n+1 control points [Where n denotes the dimension of the Bézier curve) at a ratio t (t goes from 0 to 1 in a loop). If you connect the interpolation points, you'll obtain n-1 connected lines. Then you apply the exactly same principle to these newly obtained lines as before (recursive step), until you finally get one line remaining. Consider again the point at the ratio t on this single line left and BOOM you got your point on the Bézier curve for your specific t value. Increase t and continue this process until you plotted the curve (Graphic equivalent of the description see below. I don't own the image, the source is: http://wiki.ece.cmu.edu) 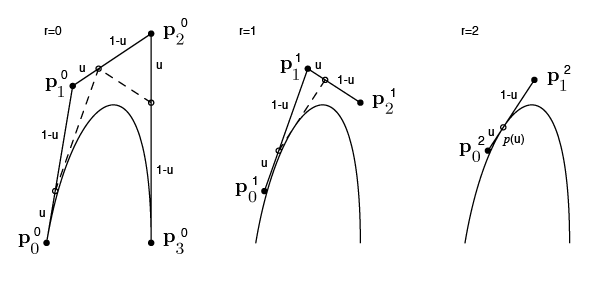 In this article, I'll supply source code snippets for both algorithms mentioned above and will add a simple performance test to compare them. Additionally, I am going to polish the direct approach for performance and will depict some recipes I learned from other blogs to increase the efficiency of the plotting algorithm.

Background. Splines, What for?

But why do I even need such geometrical primitives? I am currently working on my captcha wordpress plugin, which builds the captcha from the ground up and therefore needs some mechanism to rasterize geometrical figures such as characters (Yes for once I am talking of those, not the data type\^\^). Thus I need three different shapes: Simple lines, circles (or more generally ellipses) and lastly Bézier curves. I could compose rudimentary characters just with lines and circles but we do have some ambition over here, don't we? :)

This means that I will essentially define a new, but very primitive font. I guess that my font will contain around 10 to 15 glyphs and it will use a mezcla (mix) of bitmap and outline fonts techniques. If you want to know more about them, just read it up. I am also going to publish a separate post blog about this font project in the near future, so stay tuned (Edit: The future has arrived. I am really excited about how ugly and cruel this font is going to be (Actually that's even an advantage for CAPTCHAS).

If you are further interested in the technical background knowledge and mathematical properties of Bézier splines, consider reading the Wikipedia article or this wonderful tutorial and then there's also this nice introduction. The authors of those articles explain the concepts ways better than a layman as I ever could. Here, I just present some simple code snippets to get started and wet the appetite, as well as a discussion of performance issues.

Finally we get to see some actual code. This python script essentially draws quadratic and cubic Bézier curves. That's the direct approach as stated above. Note that the code is yet horribly unoptimized.

And now De Casteljau’s algorithm. It's not limited to quadratic and cubic Bézier curves, on the contrary, you are free to plot curves of any degree n. Just give it a try!

And finally the performance comparison between the two algorithms. The direct approach wins over De Casteljau’s algorithm (I guess because recursion is such a slowpoke), but on the other side, De Casteljau's method is numerically stable. The direct approach is a little more than twice as fast (This might not be accurate, since Python isn't really the language you use for such stuff and additionally my implementation is certainly not good enough such that I can say that any De Casteljau algorithm implementation is exactly twice as slow as the direct approach. These comparisons are rather a rough estimation)! Note that the initial type checks in draw_curve() in class Casteljau were disabled while testing the speed to avoid contortions. Furthermore, I've shamelessly stolen the timing method from this site, using the following little class to time within with statements:

Eventually the source code for the performance tests. Please consider that it might be hard to reproduce the exact same results as below, since the code in the github repo evolves over time:

The above timing yields this output:

When it comes to optimization, one can go almost infinitely deep and far. There's a huge amount of scientific research and work invested, because saving CPU power means saving money. For instance, in compiler development, the optimization part constitutes the most complex and work-intense part (If I remember my coursera lessons correctly). I instead will only scratch on the surface and won't dive into the depths of optimizing (Well these metaphors combined is utterly strange ;))
I will tune the direct algorithm, because it is just faster then De Casteljau's recursive approach.

Some concepts (and common sense):

We saw some performance boosting techniques. From initial 7,3 seconds with De Casteljaus algorithm (plotting 500 quadratic splines) , we made it down to 0.252 seconds! That's around 40 times faster. Of course we could be better, but let's stop here!

That's almost it! We also need a algorithm for plotting staright lines. Maybe you think that's a trivial task, but not so fast my dear. There's actually quite a bit of math behind simple even lines! I adopted the algorithm from this site, which offers also a 100 page strong essay about plotting geometrical primitives. The text is quite hard to understand if you don't possess profound mathematical knowledge, but it's still worth a glimpse!

However, this is the line plotting algorithm:

I have shown you some rasterization algorithms and now I am ready to use them to draw my font. In the next article, I will use this code! So stay tuned and send me a letter for Christmas! s!