Where computer science meets entrepreneurship — Blog articles about programming and the lifestyle attached to it.

As promised previously in my last article, I will guide you through the creation process of a rudimentary font. I will use the glyphs of my font to draw captchas and incorportate the implementation in my brand new captcha plugin for wordpress. There are already quite a few captcha plugins out there, some of them are better than mine (RECAPTCHAfor instance translates books and thus solves two problems at the same time), others are worse, because the math equations can simply be parsed (As far as I can judge without inspecting the code further).

In this article however, I will center the focus entirely on the font and abstract from it's future usage in the captcha.

A logical start of font creation is to answer the question what type of font we are going to create. But lets first introduce some concepts that are of importance when it comes to font design.

In short: A font is a collection of glyphs. Each glyph has a shape and there are various ways of describing that shape. You can imagine a glyph as a instanteation of a character. Whereas a character is a conecpt a glyph is a reification of that concept. When we speak of glyphs, we are interested in the form, design and view of the character, not the character itself as a carrier of information. Now in our latin font, there is a one-to-one mapping of glyphs to characters. But in some other languages there might be different glyphs for a character depending on the adjacent characters (For instance in arabic some characters have four or more different glyphs).

Now lets answer the question which font format we are going to choose. Essentially, there are three different font types, each of them with different advantages and drawbacks. They are:

I will develop a outline font, but compared to TrueType/OpenType/PostScript fonts, it will be in a very basic format and not even include the full alphabet (Just around 10-15 characters). Furthermore I will use quadratic and cubic Bézier splines. The glyphs will be of very very easy shape (Each glyph will essentially be only a path), but for some characters I will add some additional parameters to illustrate the entire possibilities. The final plugin written in PHP will be able to save the captchas to png and bbm files, both of them are bitmap formats.
It'd be certainly possible to directly use vector graphic techniques (Such as scalable vector graphics) and let the plugin just generate them. As a layman, I think this would be considerably faster and a better solution, since I can use the high level language SVG and the rasterization process will happen on the client-side and not on the server as in my intentional approach.

Why is this faster?

Because the most time consuming process is the rasterization of the specific Bézier splines and simple lines that define the single glyphs of the font. SVG files just describe the shape of these characters, but the final drawing process to the monitor happens in the browser of the client.
But on the other side, I guess that .svg captchas are more easily deciphered (OCR in short), because the cracker does not have to remove noise and guess the bitmap structure which comprises the actual letters (Please leave a comment if you think differently).
That being said, I will still use the latter way (Plotting my captcha directly and producing bitmap pictures like PNG's) in the full conscience that it might be the worse solution (Heck, writing captcha software in 2013 is certainily a bad idea). But all this is legitmated with the fruitful learning process that accompanies the coding process.

Now in the case you shrug your shoulders when I mention Bézier curves, consider reading my previous blog article that also includes a bunch of links to very nice resources. Be aware that quite a bit of math hides behind Bézier splines and that I won't use heavily optimized algorithms for plotting the splines, simply out of the reason that I don't have the mathematical/algorithmic knowledge and skill to do so.

If I got you hooked and you also want to create your own fonts and you want to really use them everywhere and save them in a offical format such as PostScript, SVG or TrueType/OpenType, consider the application FontForge [Link goes here], that helps you quite a lot and bewares you of the quirky low level plotting algorithms. For my font, I just use FontForge and Inkscape to get a look and feel experience of how my glyphs sould look like, since it's kinda hard to think entirely in points and control points of Bézier splines without actually drawing them ;)

Because I needed some kind of sketch board to develop and design my glyphs, I looked for a vector graphics application. Inkscape really fit perfectly and it generates easy parsable .svg files. Then I created a little script that was capable of exporting the Bézier points and line points of the .svg files generated by Inkscape. That wasn't too hard, since .svg is a W3C standard and the

The export script I made looks like this (Please consider that only closed paths and cubic/quadratic and lines are properly parsed! If this is not enough for your pupose, the script is easy extendable tough):

Now the font design can finally begin! I searched for inspiration at googlefonts and tried to redraw the glyphs freehand. This is of course really unprofessional, because if you actually want to implement a real font, you're better off using FontForge, a nice open source program that incorporates many tools that help you create a sophisticated font. I won't get down that path, instead I just implemented some cool glyphs according to my taste and after a short design period, I imported them with the script listed above into my python font module that was already equipped with the plotting algorithms I discussed in the previous article. In the aforementioned module, I am also going to store the glyph data (Implemented as a list of points).

Here are some screenshots that you guys can get a impression how my workflow was.

First I roughly outline the shape of the glyph and it looks like this: 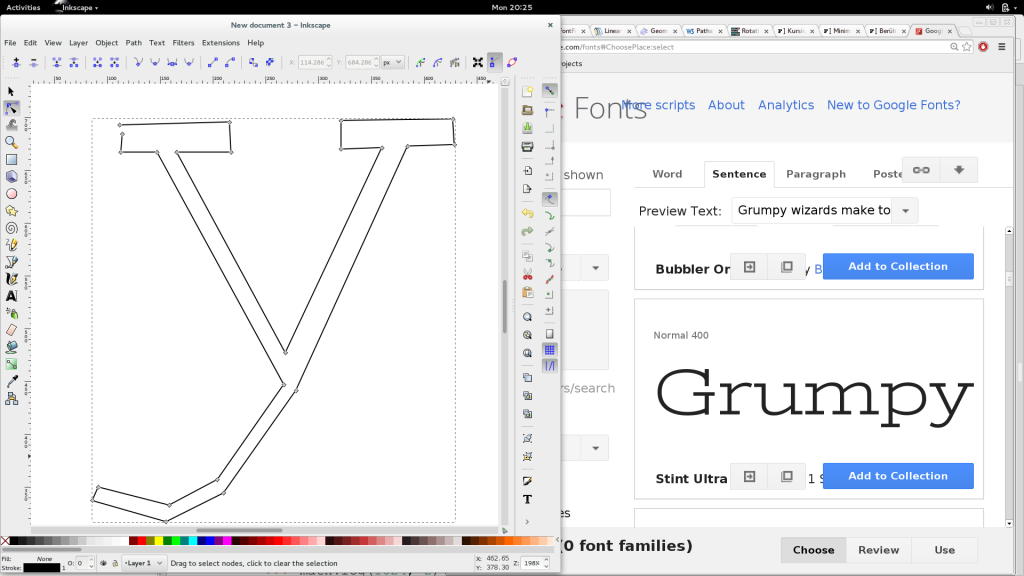 Then after some reshaping: 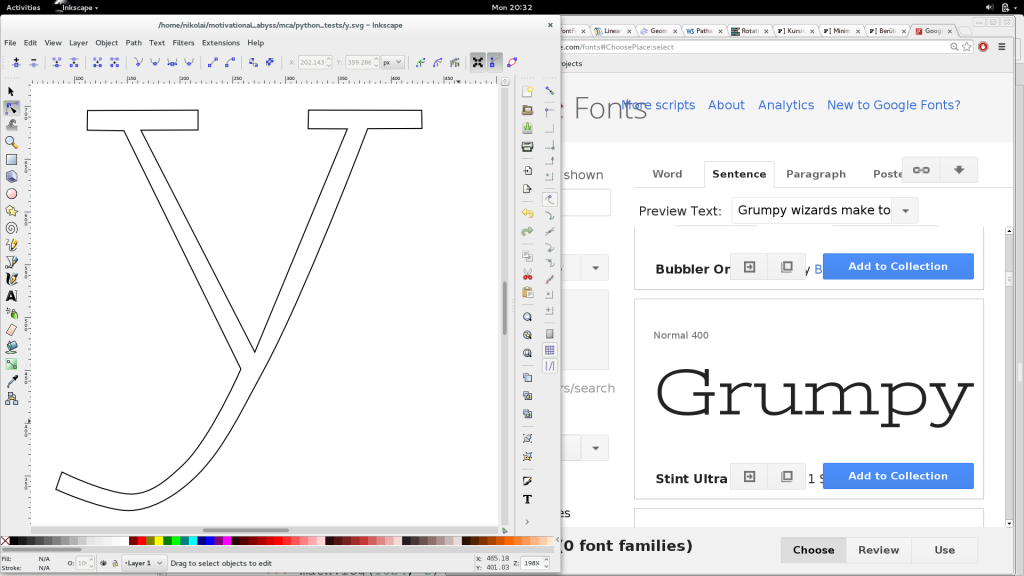 And finally after I exported it and redrawn it using my own module: [ 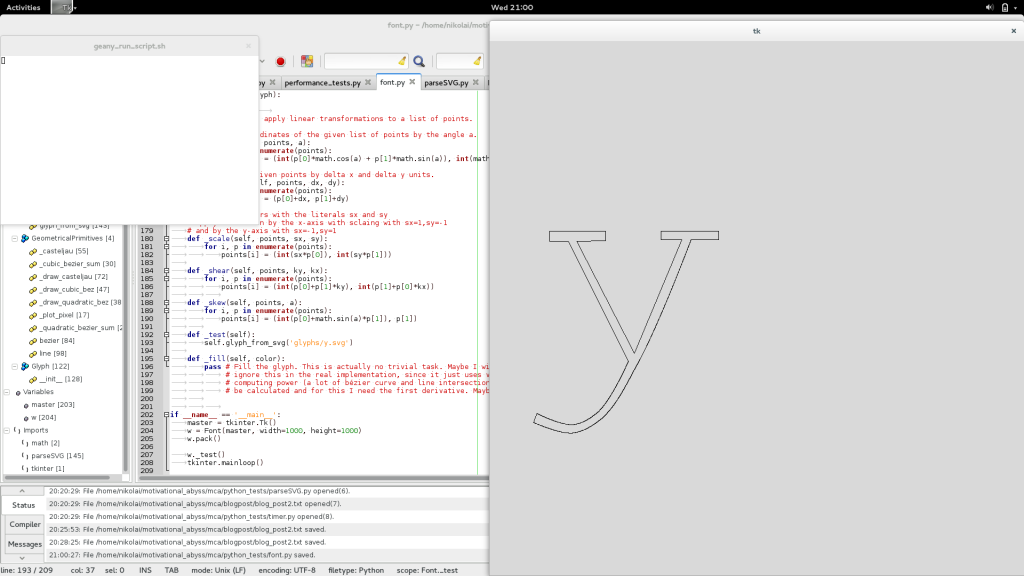 And to end this post, I will present you my final alphabet all drawn on a tkinter canvas with my own plotting algorithms. There are also variants where the alphabet is skewed and a shear operations ar applied. Here are the screenshots: 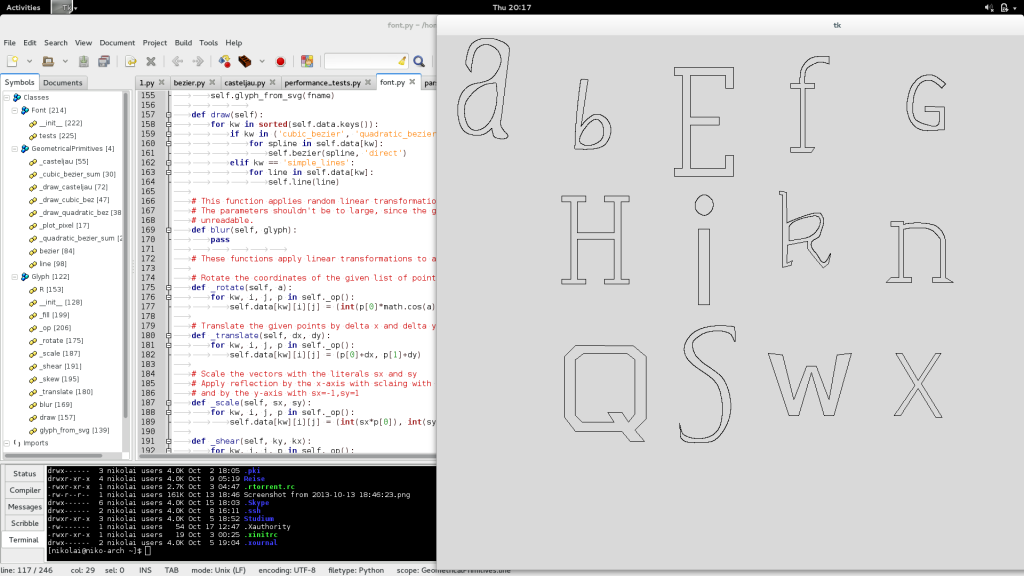 All the glyphs drawn in a scatter. They are imported from the Inkscape .svg files and plotted using the algorithms developed in the last blot post.

And after applying some linear transformations: 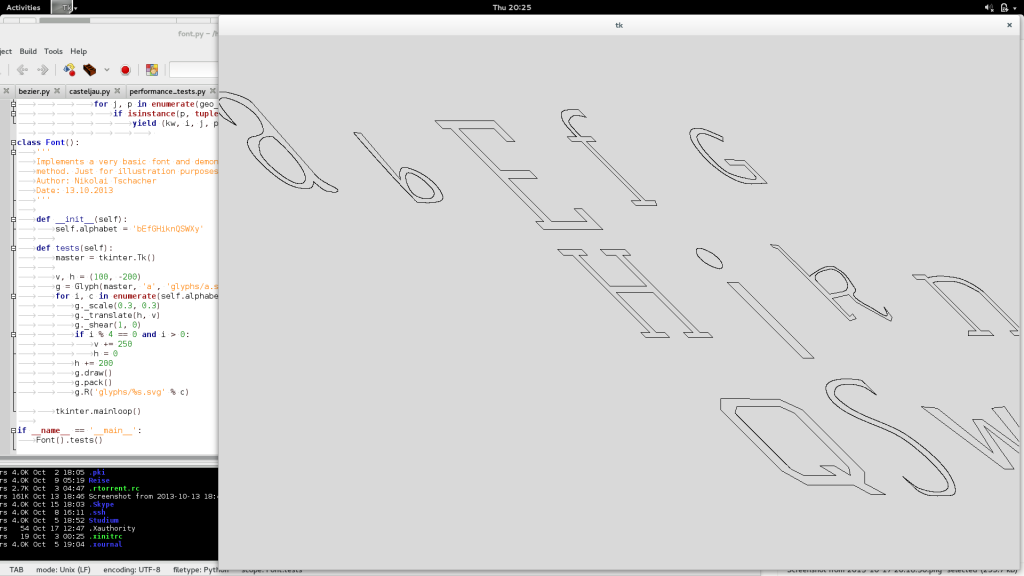 In this picture all glyphs moved using shear operations 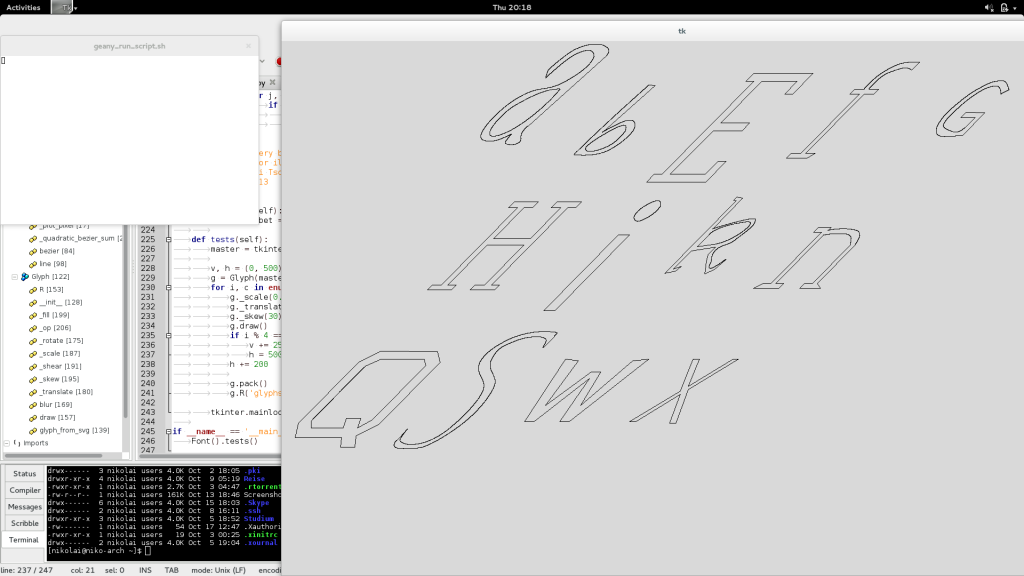 My glyphs are far from beautiful or even consistent, but this isn't really a drawback either, since I will use them for my captcha plugin (Whose implementation in PHP will be presented in the next blog post). But the clear advantage is obviously that all my glyphs (although they don't really look so) consist of simple lines and Bézier splines, which means that we can express them as a mathematical function and therefor apply a wide range of transformations on them without any loss of information! After blurring the glyphs to our liking, we can finally export it as a raster grafics format (such as png) and they eventually become immutable. Maybe I will add in the PHP imlementation a way to fill the glyphs with color in order to obliterate pattern recognition methods.
As mentioned before, If you are interested in professional font/glyph design, visit fontforge.org and read the great resources over there.

And that's the end! Stay tuned for the final article of my series, that will talk about the captcha plugin!